Today was all about lasting. With some new grips to come to grips with, and some weird interactions with objects.

Simply, the trick is to pull the leather over the last, nail it, and then in this case, glue it. But that bit about pulling and nailing is actually a bit tricky. Firstly one is using a tool to do the grabbing and pulling. So similar to a canvas puller, its a tool that grabs, pivots back on it’s foot, and so pulls whatever its grabbing. These lasting pliers have a bit on them that means one can hammer in a tack or nail. So you manipulate the lasting pliers to manipulate the leather with one hand, then hold the leather in place with the other, you can then release the lasting pliers, and use them as a hammer, or alternatively pick up a hammer. But you need to place the nail, and hold it in a position for nailing. Ah. So that hand that was holding the leather in place also needs to hold the nail.

The idea here is to use your thumb to hold the leather in place, but to have the index finger available to hold the nail in the right position, while using the other fingers to hold the last. The result is a okay sign like arrangement. Once that is sorted out, that’s fine. The fact is it took me a while to sort that out. There was lots of fumbling round, trying to sort out the best position to do things etc. I ended up preferring to do this in my lap, using my knees as a vice, but working on a last peg was also an option.

So a whole new set of physical co-ordinations to handle. 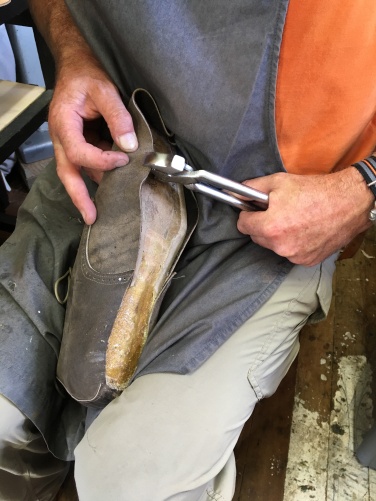 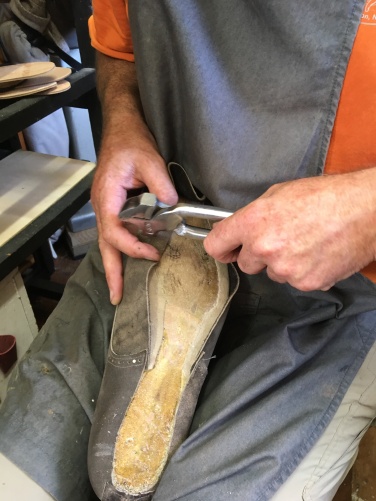 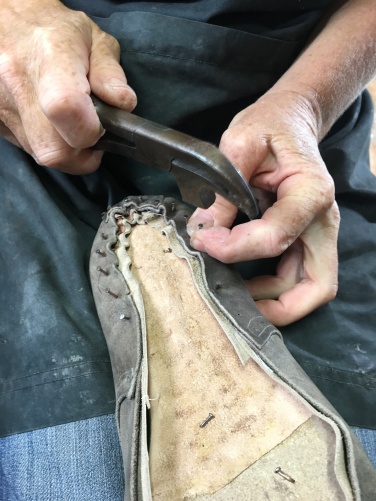 Leather is your friend.

All this faffing about with grips, pulling, shaping etc, would have been even more difficult if leather wasn’t a reasonably forgiving material. Although there is a bit less stretch in one direction of a piece of leather (all to do with the way the skin sits on the animal) generally it will move around and is fairly accommodating.

The process of lasting is to stretch the inner and outer bits of leather over the last to make a shape. We started on the heel or seat of the shoe, which has the tightest curve, but also seems to anchor the upper to the last. A heel stiffener was glued into place with a glue that take a while to dry. This glue can be a mix of wallpaper glue and PVA, but in this case it was a commercial mix.

After some wiggling round, and positioning, the inner was first worked over the last. This was the nailing bit I talked about earlier. The whole inner was roughly tacked in place, and then a series of nails was put in place to gather up the leather. All the time, stretching it, and trying not to get any creases or loose bits on the last. This is a complex task, and requires a bit of knowhow and experience. A couple of times things were re-done, or Sue would direct me to pull in a certain way or direction to ensure that the last was stretched and placed correctly. It’s that experienced knowledge at work, something that’s only chimes with lots of prior wrestling with the materials.

Once the inner was gathered up with nails only, the leather is lifted slightly away from the sole, to allow for the glue to be pasted in. In this case a contact neoprene adhesive which took a while to dry on both sides. When dry, the leather was then pushed into place with hands and tools. This involved using a tool known as a tack lifter, that allowed me to apply really specific pressure to parts, and then the back of a shoe makers hammer, and the face of the hammer. This was done around the nails, and then with the nails pulled out. There was also some using of body weight against the door frame, which was quite useful once the nails were out, and was a good finisher. Each layer was then trimmed with a knife, to remove some of the excess and the creases, and then ground on the sanding belt. Traditionally this would all be done with a knife; the sanding belt is just quicker, and probably creates a better surface.

This process was repeated for the outer, and then the inner and outer vamp at the front. You can see how forgiving the leather is in the photos, and how stretched it is. 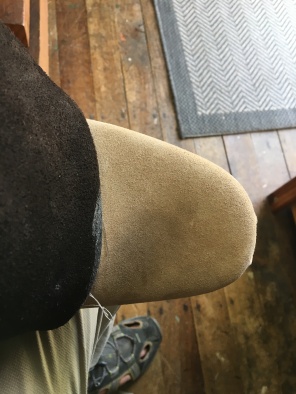 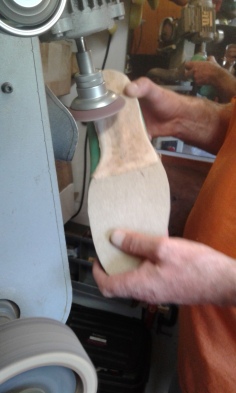 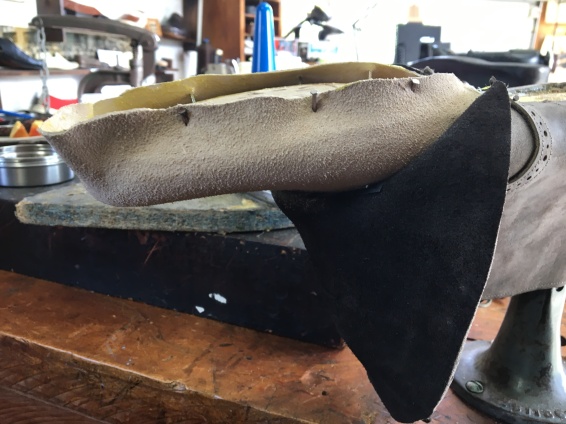 What’s more in the photos below, you can see the edge of the line of the sole, which will end up under the final outer sole, and where it meets the rise of the last that will be the outer one can see. There shouldn’t be any creases in that bit. Ideally there shouldn’t be creases in the inner which is going to be against your foot inside the shoe, and no creases in the outer where its seen. A lot of the lasting process is getting those creases out of where they are visible, and then skiving them off from where they are not visible, but will be under the sole. 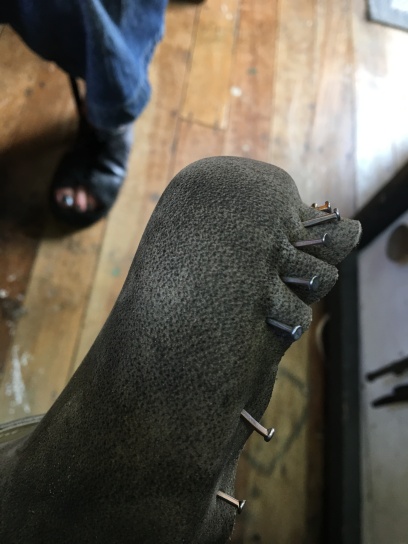 You can see that nice clean edge where the out is visible, and then turns over the edge in the plane of the sole.

Two states. On the left, all tacked in to place, on the right; roughly tacked.

Typically hides have a stretchy direction, and a not stretchy direction, which is determined by how the hide sits on the animal. In shoe making, the non-stretchy direction is placed lengthwise, from heel to toe. This means that once that length is in place, we can use the directional stretch to pull the leather in around the curves of the last’s form.  There is a form hugging here that is akin in action, even if its not the same mechanics, to a dress cut on the bias that hugs the form.

The thing to note here is just how shapeable the leather is. Yes, there was a little moisture applied to the leather prior to this process, but very little. A spritz of equal parts water and metholatyed spirits. But bugger all. True, more water and steaming could be done. This might make some things easier I suppose, and in some cases, its probably necessary. But not always. Hide is a naturally elastic membrane, that shifts under muscle, bone, and bodily tissue. With the right sort of tanning, we maintain some of that elasticity, shaping and moulding capacity, and bring it to the shoe making process, allowing us to manipulate it, and make use of it.